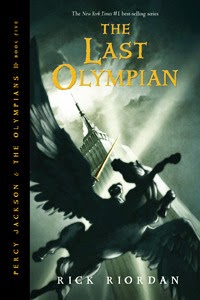 All year the half-bloods have been preparing for battle against the Titans, knowing the odds are against them. Kronos is stronger than ever, and with every god and half-blood he recruits, his power only grows.

In this momentous final book in the "New York Times" best-selling series, the prophecy surrounding Percy's sixteenth birthday unfolds. And as the battle for Western civilization rages on the streets of Manhattan, Percy faces a terrifying suspicion that he may be fighting against his own fate.

What an epic, perfect ending to a brilliant series. I just cannot get over how amazing series this was, and now it’s ended. Again it was full of action, unexpected events, and scenes that pull a smile on my face.

The Action was amped up in The Last Olympian, with the war coming to its peak, and the climax of the series, the prophecy finally coming to its moment. One thing I have to say about this book that it made me think about hard, trying to imagine how, how these Demi-Gods are just so young and they are fighting a war, I know it’s not real and all, but the way Rick wrote and just the whole premise of these books made me reflect about it. It made me imagine how hard it was in WWI and WWII and all those young men fighting. The book starts off with a bang and there is never a dull moment.  There was either war action, or conflict between characters.

I really enjoyed that it was fast paced, like the other novels right from the beginning we can already see things are going to move quickly. There was not a moment where I wanted to put the book down, all I wanted to do was to keep reading and reading.  I found that with all the books the Percy Jackson and the Olympian Series they were all fasted paced but I think The Last Olympian was the most fasted paced out of all of them.

I have probably said this in all of my reviews on the Series, but I love Mythology, especially, Greek Mythology. And I love the way that Rick Riordan incorporates his views on ancient stories. So I loved all seeing and hearing about all the gods and all the Mythology creatures and all about the world, from the heroes to the villains.

Most of the Characters development throughout the series, but I think the Characters development the most in The Last Olympian. They all grow more, especially Percy. He learns to deal with uneasy situations and ones that at the start of the series would not have overcome. I love that we get to see his growth throughout the series, we finally to get to see him grown up. I also like that we get to see ‘normal’ teenage situations occur. It makes the characters more real in a sense.

Annabeth and Percy's relationship is kind of strained and Rachel showing up isn't helping matters, but after the long wait off 4 books and the war. We finally get to see them together and happy to a point. The end scene, made the fangirl of me, squeal.

We finally get to see how the prophecy plays out. I was so what shocked with what happen but not completely as I did guess something bad would happen, just not what occur. We all also find out more about Luke's past, which I thought was great characterisation from Riordan. Many other secrets that come to light, which held to the climax of the book and the series.

I enjoyed this series so much, they were fun, emotional, light reads. That put a smile on my face. I recommend everyone to read these books, they are for everyone. But if you love Mythology, then grab this now. Also people of any age will love these books. I’m 16 and I just was mesmerised by them. I cannot wait to start the Heroes of Olympus Series.

Some of my Favourite Quotes;

“With great power... comes great need to take a nap. Wake me up later.”

“It's hard to enjoy practical jokes when your whole life feels like one.”

Have you read the Percy Jackson Series yet? What did you think of it? If you haven’t has my review helped in your decision to read it?

Posted by Angelique Gouvas at 15:54