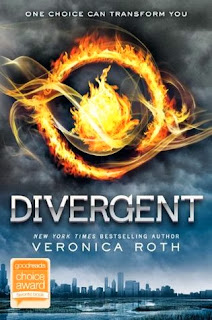 In Beatrice Prior's dystopian Chicago world, society is divided into five factions, each dedicated to the cultivation of a particular virtue--Candor (the honest), Abnegation (the selfless), Dauntless (the brave), Amity (the peaceful), and Erudite (the intelligent). On an appointed day of every year, all sixteen-year-olds must select the faction to which they will devote the rest of their lives. For Beatrice, the decision is between staying with her family and being who she really is--she can't have both. So she makes a choice that surprises everyone, including herself.

During the highly competitive initiation that follows, Beatrice renames herself Tris and struggles alongside her fellow initiates to live out the choice they have made. Together they must undergo extreme physical tests of endurance and intense psychological simulations, some with devastating consequences. As initiation transforms them all, Tris must determine who her friends really are--and where, exactly, a romance with a sometimes fascinating, sometimes exasperating boy fits into the life she's chosen. But Tris also has a secret, one she's kept hidden from everyone because she's been warned it can mean death. And as she discovers unrest and growing conflict that threaten to unravel her seemingly perfect society, she also learns that her secret might help her save those she loves . . . or it might destroy her

Review
I went into reading Divergent with high expectations and I wasn't disappointed. Divergent is action packed and I couldn't put it down, I was just hungry for more.

Veronicas’ writing is simply amazing and the world she built was unbelievably real. The way that she categorized each human into 5 different types of people, into 5 different factions; Dauntless, Abnegation, Erudite, Candor and Amity. They way that Veronica came up with a way to separated people in that, is beyond me. They world she created and set up was perfect, I could picture what everything that was happening, and where it was happening. At first I was a little confused with the world but after a while I did get used to it and it made a whole lot more sense to me. I also loved the concept of how they became a part of a faction.

The heroine of Divergent is 16-year-old Beatrice. I love her character. Firstly she is female 2nd she is totally, well she comes to be. She is everything I ask for in a main character and since it’s in her perspective it’s perfect. She is vulnerable in the right times, and strong when we need her to be.

Four what can I say about Four? He is just amazing. From our first impressions, some people might not like him that much as he brought forward as this tough strong character. But once Tris (Beatrice) gets to know him so do we. There is so many under layers and you understand why he built this wall. I also loved with a passion of the foreshadowing we had of Four in one of the first few chapters.

I loved how the relationship grew slowly between Tris and Four. It was nice for a YA novel to have a relationship to grow slowly. It was different and I think it was perfect. And I communed Veronica for that.

ACTION, ACTION, ACTION. I loved all the Action it was just ideal. If you love action then this book is for you. Guns, jumping off buildings, fighting, jumping on moving trains come on, if this does not sound epic, don’t know what does. There was so many heart- pounding, nail biting worthy moments. Especially the last part of the book, gave me an adrenaline rush. I also think that the villains in Divergent were very unexpected well to me at first they were and I did not expect things to happen the way that they did

I also liked that Veronica explore the theme of fear and how everyone has fears. And we need to sometimes overcome those fears in our lives. But sometimes we need to live with those fears. Which is demonstrated through Four and Tris. The concept of the tattoos, love it. I adore tattoos so I was very fascinated by it. It was very different and drew me in so much to the book.

The ending was wow, just so many things happening at once, but I was so happy that there was not a major cliff-hanger. I sometimes dislike these major cliff YA novels but Divergent didn't have that.

There is only one thing I have negative to say and that’s I had no connection to most of the characters and this is very, very rare for me. I just did not feel anything for them (there will be a little spoiler here) when some characters died, I felt nothing. I was just like ‘oh they died.’

Some of my Favourite Quotes;

“We believe in ordinary acts of bravery, in the courage that drives one person to stand up for another.”


“I might be in love with you." He smiles a little. "I'm waiting until I'm sure to tell you, though.”


I Give Divergent 4 out of 5 stars

What are your thoughts on Divergent?
Posted by Angelique Gouvas at 03:00